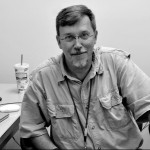 is currently a Senior Multimedia Developer at Gulfstream Aerospace. He has photographed motor sports professionally at Daytona Int Speedway from 1987-2006. At the end of 1997 he began working at Kennedy Space Center as a photographer, documenting the build-up and post-flight disassembly of the solid rocket boosters. This work also took him to other NASA locations, on through the end of the space shuttle program in 2011. He’s taken photos for numerous publications.

All posts by Jim Wise

How to Use a Unique Opportunity to Help Advance Your Photography

How to Add Metadata to Your Images in Photoshop